Heiko Bleher was invited and nominated as a new Fellow of the Explorers Club to their annual Dinner at the Waldorf Astoria in New York on March 20th, 2010. It was an immense honour for Heiko and the President Emeritus Alfred S. McLaren of The Explorers Club, retired U.S. Navy Captain, recipient of the Distinguished Service Medal and two Legions of Merit, said at the board meeting that no one at The Explorers Club, since its foundation in 1904, has done nearly as many expeditions as Heiko Bleher…

The Explorers Club annual Dinner took place at the elusive Waldorf Astoria in New York’s Park Avenue on March 20th, 2010. And Heiko Bleher was invited and credited by the board of Directors and in particular because of its President Emeritus Alfred S. McLaren of The Explorers Club, retired U.S. Navy Captain, recipient of the Distinguished Service Medal and two Legions of Merit, who showed at the meeting that no one at The Explorers Club, since its foundation in 1904, has done nearly as many expeditions as Heiko Bleher. This was an immense honour… Below now some photos from this worldwide unique event and some videos of the evening. 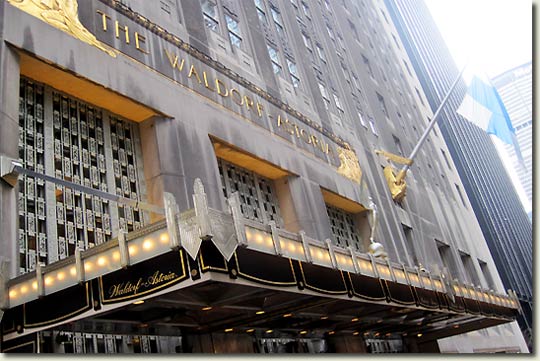 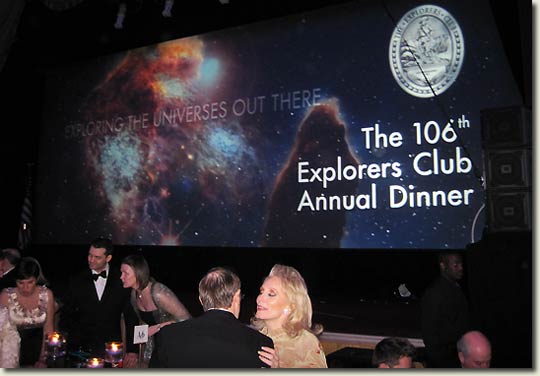 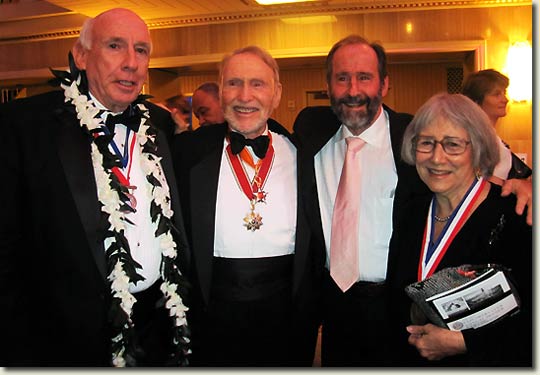 The Explorer Annual Dinner took place in New York’s most prestigious Hotel, The Waldorf Astoria, and in its giant hall surrounded by balconies decorated in gold three-stories high and crystal Chandeliers everywhere. The topic of the evening was On the cusp of infinity: Exploring the Universes out there. Heiko Bleher was invited and nominated an Explorers Club Fellow here together with (from left): President Emeritus Alfred S. McLaren of The Explorers Club, Captain Norman Baker who was the second-in-command, radioman, and celestial navigator for legendary anthropologist Thor Heyerdahl on all three of his reed boat expeditions, the two RA voyages and the Tigris, Heiko Bleher new Exploers Club Fellow and Eugenie Clark the world famous “Shark Lady”. 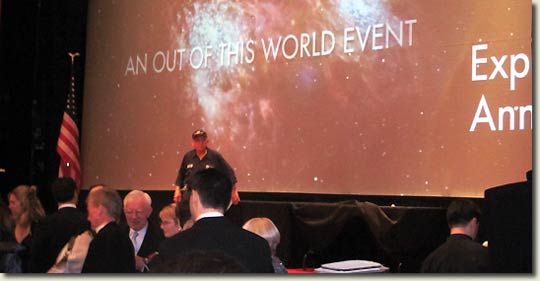 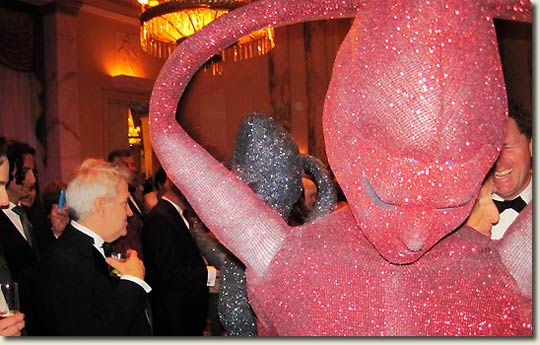 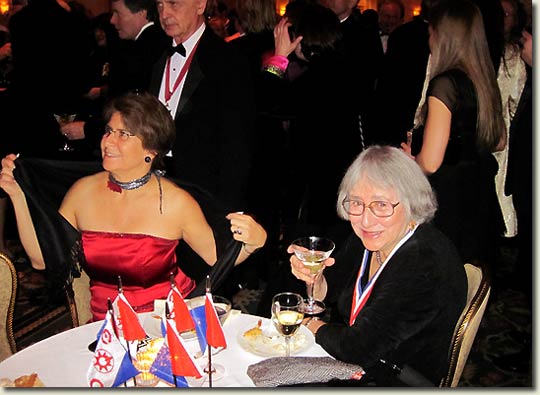 This Out of This World Event started with beautiful pink Avatars (extraterrestrial beings flown in from Pandora), Scottish and classical music was played, there was a silent auction everyone could bet including an Uncirculated New Zealand Bank note autographed by Sir Edmund Hillary HON’53 for US$ 1250. And the best cocktails and champagne, French wines and everything else one could wish was served. Here Eugenie Clark and her Daughter Aya (in red). 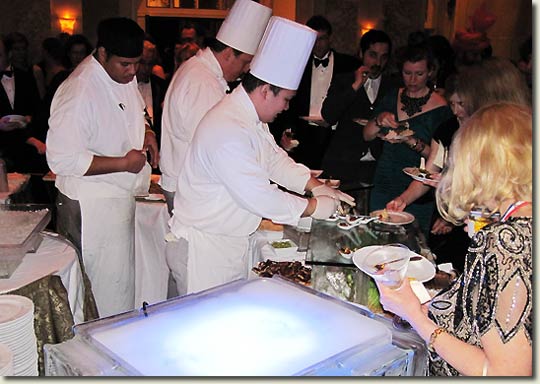 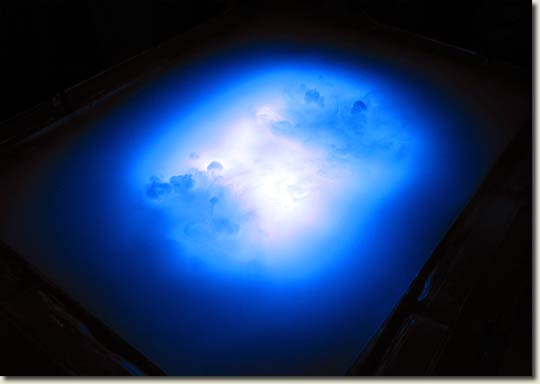 The cocktail tables were decorated with fresh moulded ice blocks – one with the Explorers Club logo and one with an astronaut. There was a giant buffet before the dinner with unique appetisers prepared by the Chef and with an astronaut look and blue boiling ice water… Than the 3-star dinner was served with amazing creations of the German Chef (see the desert) and Heiko was on the main table with the Captain Norman Baker, Alfred S. McLaren (not shown), John Jo Lewis Managing Director of Sub Aviator Systems (left), Eugenie Clark (centre) and other VIP’s.  Below now some videos of the evening, the moderator was the famous Canadian movie star Daniel Edward “Dan” Aykroyd (Ghostbusters…).

Explorers Out of this World event 2010, where Heiko Bleher became a Fellow the opening talk by Dan Aykroyd

Explorers Club 2010 President speech and presentation of other speakers 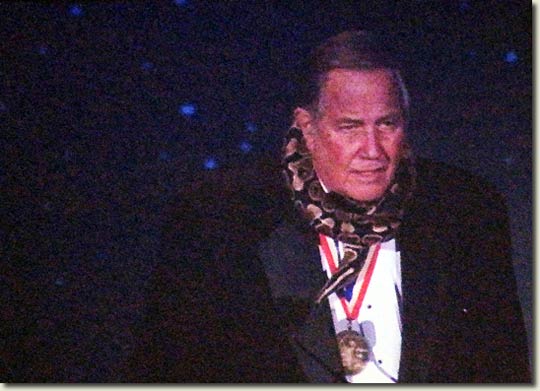 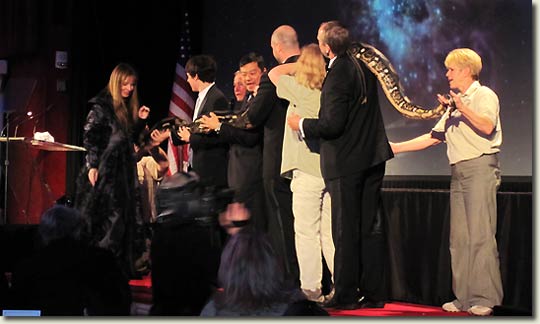 Between other VIP’s came also Jim Fowler, the professional zoologist who was host of the Emmy Award-winning-winning television show Mutual of Omaha’s Wild Kingdom. Fowler is also well known for being the official wildlife correspondent for NBC’s The Today Show since 1988 and was regularly seen on Johnny Carson’s The Tonight Show making forty appearances in total as he brought various wildlife animals on the show, the same he did to night (but the animals came from Bush Gardens). In 2000 he launched the television program Jim Fowler’s Life in the wild… The Python shown was nearly 8 metres long. 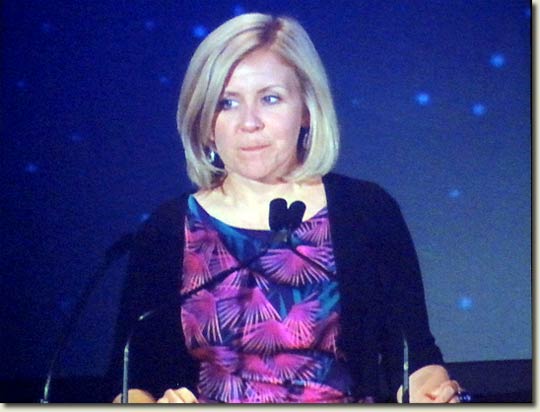 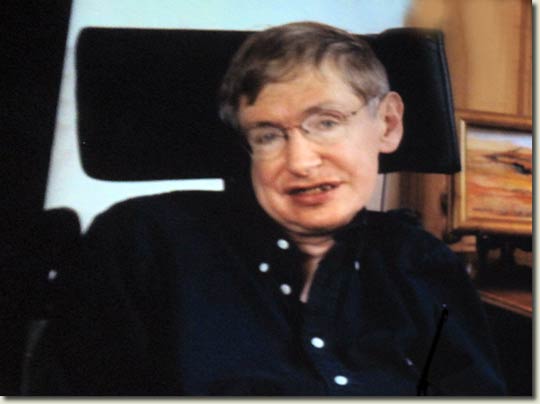 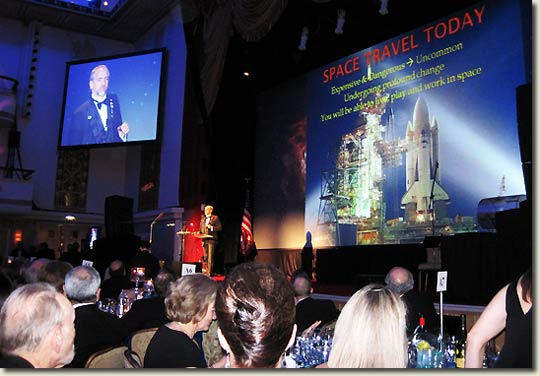 Than spoke Lucy, the daughter of the world famous Stephen William Hawking (born 8 January 1942), who is a British theoretical physicist, whose world-renowned scientific career spans over 40 years. His books and public appearances have made him an academic celebrity and he is an Honorary Fellow of the Royal Society of Arts and a lifetime member of the Pontifical Academy of Sciences and in 2009 was awarded the Presidential Medal of Freedom, the highest civilian award in the US. He could not come personally as he is severely disabled by motor neuron disease also known as amyotrophic lateral sclerosis (or ALS). Hawking’s illness is markedly different from typical ALS in the fact that his form of ALS would make for the most protracted case ever documented. A survival for more than 10 years after diagnosis is uncommon for ALS; the longest documented durations are 32 and 39 years and these cases were termed benign because of the lack of the typical progressive course.
An at the end there was Live Auction, like a Exclusive Dinner for twenty at the Explorers Club with Musical Accompaniment for $ 10,000, or a Seven Night Voyage Aboard “The World” for $ 26,250, or a Eight Day Spiritual, Cultural and Educational Adventure to Kathmandu for two for $ 17,000, or Two Zero-G Seats With Instruction By Richard Garriott, MN’98, son of the famous astronaut (above). 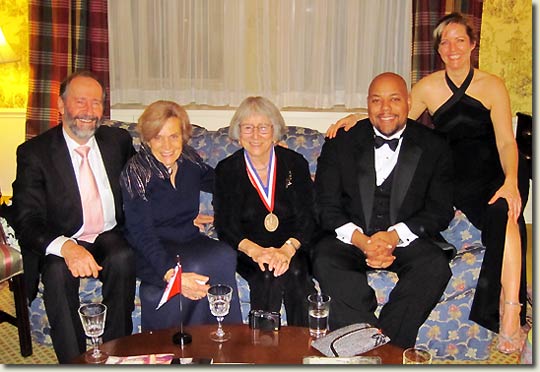 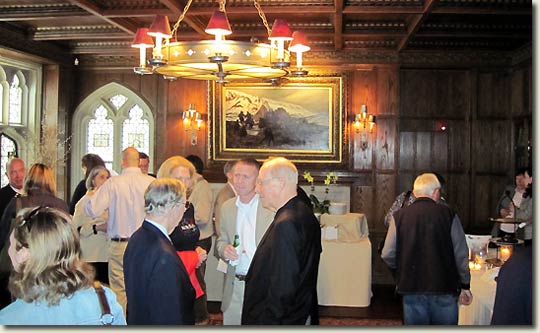 The grand spectacle ended after midnight and there were still parties going on with all the VIPs in luxury suits of the Waldorf Astoria Towers (top). The following day was another event in the beautiful ECAD (Explorers Club House in the 70th street) and so called Sunday Open House. One could see the original North Polar Sledge from Matthew Henson & Robert Perry used in 1909, or have breakfast, or buy gift items, there was an annual meeting, and after that a board of director meeting, and after that a great lunch followed by the afternoon program, which started with… 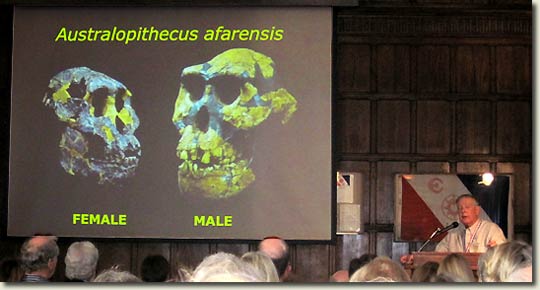 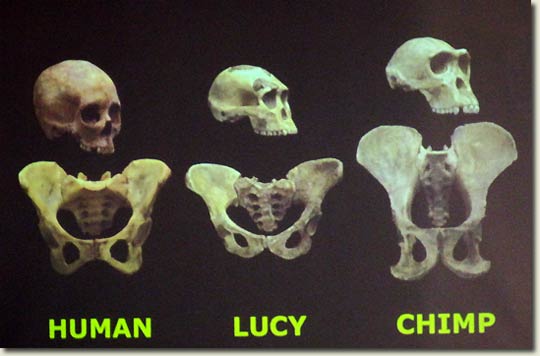 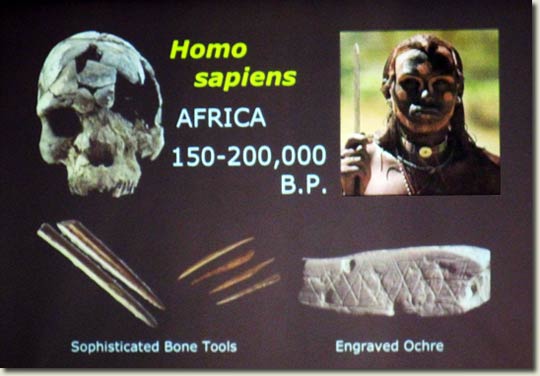 “Lucy’s Legacy: The Quest for Human Origins” by Donald Johanson FN’76, the discoverer of Lucy in 1974 near Harder in Ethiopia (see aqua geographia volume 15). Since his discovery of Lucy the over 3 million year old fossils, another 400 fossil specimens (or parts) of the Australopithecus afarensis were found, and interesting is that Lucy’s man was always much larger than our female ancestor… Also interesting was his comparison between the Human, Lucy and the Chimp. And now that it is confirmed that the Homo sapiens came out of Africa (which is the cradle of mankind) between 150-200,000 years ago and eliminated Homo neanderthalensis. 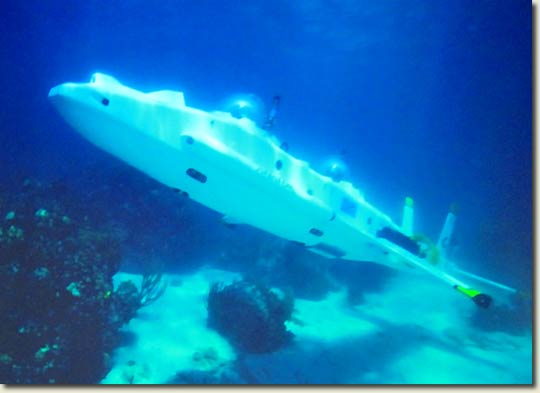 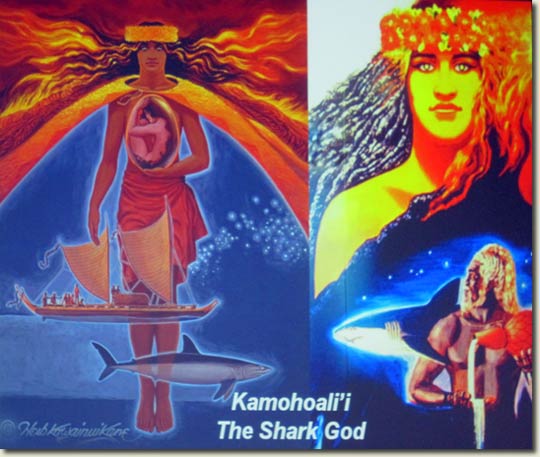 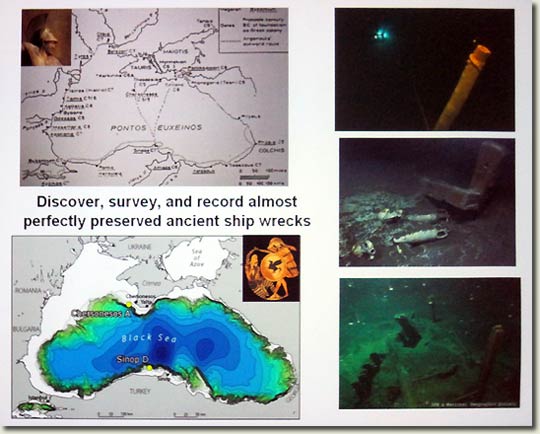 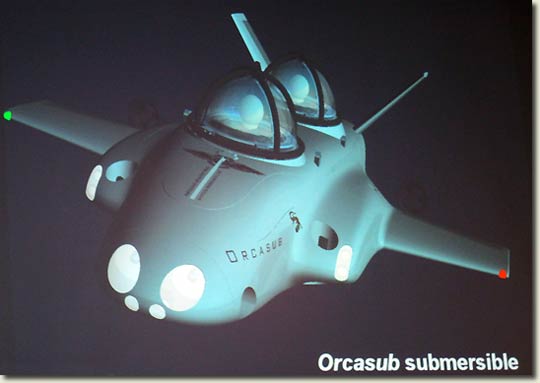 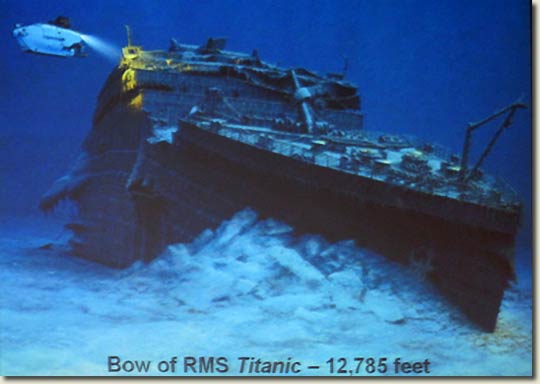 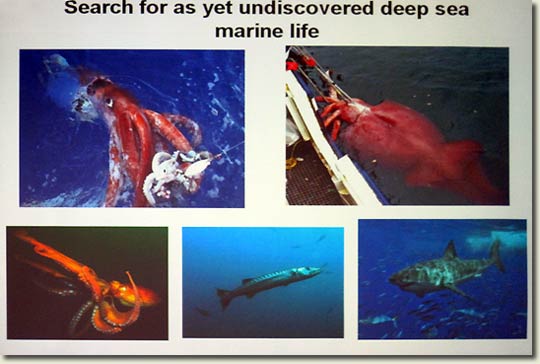 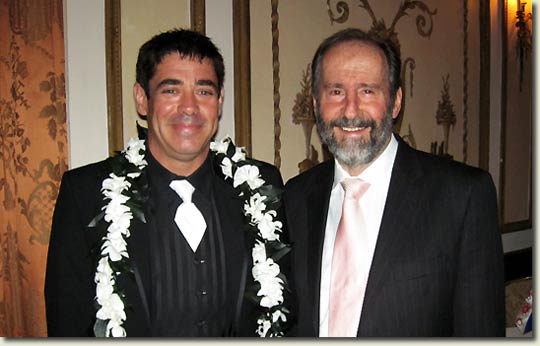 The final presentation was “Super Aviator and Orcasub Subersibles, the Exciting Future of Manned Undersea Exploration” by the President Emeritus Alfred S. McLaren of The Explorers Club, an amazing construction of a two-seater submarine like underwater vehicle which can go down as far as 1000 feet. Such famous persons, like Eugenie Clark. have already used it and it was named after the Shark God Kamohoali’i. It is built and can be rented out to make discoveries worldwide, like to search for the sunken treasures in the Black Sea. Now they have already the second version on the sketch board, the Orcasub, which can be built within one year and go down as deep beyond 10,000 feet and explore wracks like the sunken Titanic or the monsters of the deep…
It was a great event and a fantastic weekend and I have to thank Eugenie Clark, and naturally Alfred S. McLaren and John Jo Lewis (lower photo with Heiko), and all the members of the Explorers Club.