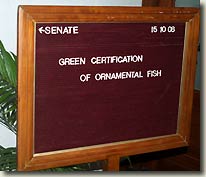 The MPEDA (The Marine Products Export Development Authority – Ministry of Commerce & Industry, Government of India, see website www.mpeda.com), inaugurated a five day workshop on the Green Certification of Ornamental Fish in Kochi (Cochin), Kerala, India, and Heiko Bleher was invited to help (participate and give a presentation on Western Ghats)… 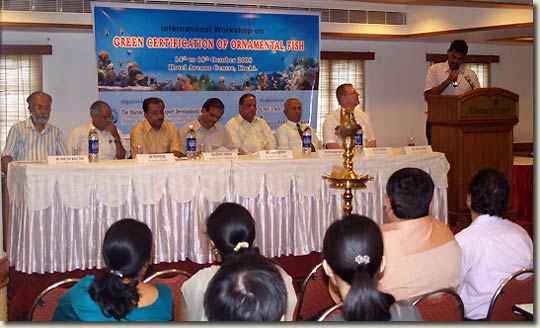 The workshop organized by MPEDA (see website www.mpeda.com) was on sustainable harvest and Green Certification of Wild caught indigenous and culture ornamental fishery resources for export. An the five day program was based on what is called the Rainbow Revolution of India MPEDA schemes for providing financial assistance for Ornamental Fish Breeding Units and Ornamental Fish Marketing Societies, something unique on planet earth, a worldwide pioneer project. Below the edited press release on the:

INTERNATIONAL WORKSHOP ON GREEN CERTIFICATION OF ORNAMENTAL FISH FROM 14TH TO 18TH OCTOBER 2008, KOCHI, INDIA
Sri. G. Mohan Kumar, Chairman Marine Products Export Development Authority inaugurated a five day workshop on the Green Certification of Ornamental Fish. This workshop was organized by MPEDA in association with project PIABA, Brazil and UNCTAD for developing guidelines on production and trade on green certified ornamental fish. Preparation of guidelines for Green Certification is a pioneering attempt to introduce eco-friendliness and product quality for ornamental fishes in the domestic and international arena. The workshop dealt with the green certification or eco-labeling to increment a fair value of product along the chain of bio-commerce in close association with the environment and stakeholders and during the workshop was also discussed the issues related to geographic indication (GI) of endemic fish species and processes and procedures involved. Shri. Kuruvilla Thomas presided over the function. Presentations were offered by sri. B. Vishnu Bhat, Dr. Alex Ploeg, Secretary General of Ornamental Fish International (OFI), the Netherlands, Dr. E. G. Silas, Prof. Madhusoodhana Kurup, Dr. I. S. Bright Singh and others, as well as by Heiko Bleher.
In the inaugural session chairman MPEDA, G. Mohan Kumar highlighted the pioneering effort taken on the issue of Green Certification and Geographic Indication of ornamental fishes. The efforts taken by MPEDA in making the Indian ornamental fish sector up to International Standards by implementing the scheme of Rainbow Revolution, was highlighted by Director (Marketing) Kuruvilla Thomas. Dr. E. G. Silas highlighted the importance of marking the fishes exported by biomarkers and microchips. Prof. Kurup expressed concerns over the depletion of indigenous ornamental fish resources and urged for preparing proper guidelines. [Note from the editor: Depletion of ornamental indigenous fishes is almost impossible, only by destruction of their habitats and pollution of the aquatic environment and by excessive consumption of the people.] Dr. Alex Ploeg, Secretary General of Ornamental Fish International (OFI) appreciated the steps taken by MPEDA in organizing this workshop and extended OFI’s support to this attempt. Sri. Anil Kumar, Assistant Director welcomed the gathering and introduced to the process lead to this workshop and Prof. Labbish Chao, Project Piaba described the implementation of ‘Buy a fish save a Tree’ program implemented in Amazon, Brazil and suggested the slogan ‘Buy a fish and save a family’ as this sector has tremendous potential to generate large scale employment in India. [Note from the editor: The program ‘Buy a fish and save a tree’ was never implemented in Brazil, only suggested. But the fact that native people collect ornamental fishes and earn a living from it exists in Amazonia since the late 1950s (long before Labbish Chao came to Manaus in 1989). This has contributed to conserve the natural environment in those Amazon regions where ornamental fishes are collected, as the poor people do not need to look for another income like deforestation to sell the lumber or to plant additional crop. In addition: the so-called Project Piaba does not exist (anymore) and has never implemented anything. The only premise Labbish Chao rented once and named ‘Project Piaba’ in the Amazon village of Barcelos is closed for years now and never functioned during the few years it was open. See also below and Bleher’s Discus volume I.]
Chairman Sri. Mohan Kumar released the book published by MPEDA on Ornamental Fish Diseases authored by Prof. Bright Singh, CUSAT. A series of books related to ornamental fish sector are under preparation.
The workshop was attended by stakeholders from producer level to wholesalers, exporters, importers and the hobbyists, in addition experts from overseas also contributed to evolve guidelines on the collection of ornamental fish from wild and production from the captive breeding. Technical sessions on the key aspects of green certification, geographic indication, good management practices, Marketing and socio-economic and environment aspects were presented and discussed for formulating proper guidelines. A field trip to fish collection sites, ornamental fish breeding units and export unit were also fixed on the third day to introduce the delegates to the actual process involved in collection, conditioning, breeding and export of ornamental fishes from India.
The possible advantages of certification are the following:
– A certification programme can be developed for indigenous fishes and cultured exotic ornamental fish species
– Possibility of obtaining of Geographical Indication for Puntius denisonii, and a couple of other species such as Carinotetradon travancoricus, Etroplus canarensis etc. – those which are endemic to a particular geographic area.
– Development of a training programme to equip the collectors for responsible utilization of the fishery resource and also reduce the loss of fish due to poor fishing methods, storage, handling and packing techniques (fish welfare). This will not only ensure eco friendliness and fish welfare but will improve the quality of fish and ensure a socially responsible business.
– Eco-labeling/Green Certification of the exported fish in international market.
– All these actions will link up the fishers to the international market and promote Brand building of Indian Ornamental fish.
Editors note: Below some photos of this worldwide unique event promoting the ornamental fish industry and its hobby. The Rainbow Revolution of India is already and the Green Certification can be of great benefit for many poor (rural) people in India, for them to earn a living and have a better live. It is a fantastic governmental (MPEDA) approach to finance and support many Indian families and an excellent example for every third-world country, including Brazil, which can learn from it. 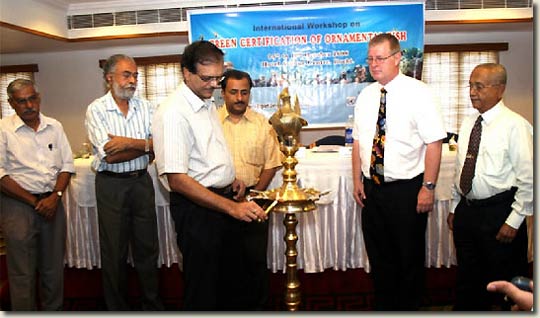 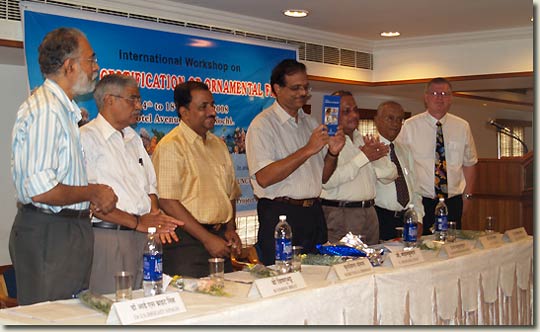 …and the Chairman handed out a beautiful MPEDA-book

For one minute everyone stud up and honoured the late Mr. Sharad R. Sane, pioneer of ornamental fish exports from India (and who imported the first tropical fishes from Heiko in the late 1960s and 1970s). Sane passed away in his hometown of Mumbai on May 14, 2008. During the five day workshop were many oral presentations – Heiko Bleher talked about the fishes of Western Ghats – and here below just a few photos with some comments of the editor and suggestions:

The presentation of existing or fish-practices in process by Mr. V. K. Dey or also by Scott Dowd compared with MSC (Marine Steward Council) can only be to a (very) limited extend be applied to the Green Certification, as it is quite different in (and for) marine creatures than freshwater species. The later Full Standards EFM (Ecosystem and Fisheries Management), CFH (Collection, Fishing and Holding), HHT (Handling, Husbandry and Transport), and MAM (Mariculture and Aquaculture Management) could be only applied for instance in topics like:
CEH (Collection practice, Eco-friendly Handling)
THH (Transport, Holding, Husbandry)
APS (Acclimatisation, Packing, and Shipping)
And for Breeding and Ornamental Nurseries:
SBM (Standard Breeding Methods)
From MSC the three principles:
–    The sustainability of stocks
–    Ecosystem impact, and
–    Effective management
could be considered (and in part applied). But most of the other standards and/or Certifications can hardly be of any use for the Green Certification. Naturally a standard has to be set, accordingly and licensing has to be given to exporters 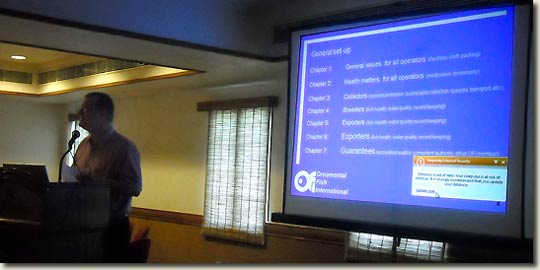 Alex Ploeg, Secretary General of OFI, talked about the needs for Ornamental Fish Certification in the light of import regulations and other requirements of the EU. But did not know that for instance the beautiful Channa bleheri is a well received and sold ornamental fish – as other beauties from India – worldwide

Labbish Chao from the University in Manaus, Brazil. He presented (unfortunately) outdated information about Amazonia, like “Buy a fish – safe a tree” – something that never existed; like Project Piaba, Center of Aquatic Conservation in Barcelos which is closed for a number of years; or none existing (at least not traceable anywhere) numbers of Ornamental fish exported from Barcelos. He showed for 2002 over 60 million Cardinal tetras (Paracheirodon axelrodi) exported while the real and published IBAMA-figures have been 10,371,392 pieces in 2002 and 13,700,564 Cardinal tetras in 2003. Never in history had the yearly export exceeded 20 million P. axelrodi. Wrong and as well misleading the genetic diversity chart of the Cardinal tetra – the majority of its distribution pattern was missing. In addition no one knows about his alleged “monitoring of fish health throughout the trade chain” (no exporter in Amazonia or importer around the world was ever monitored that except for Koi and goldfish). Another questionable presentation was his “Project Piaba  empowering fisher folks” an unknown fact, except for when Labbish Chao is once per year (often not even) on a touristic excursion in the Barcelos area and talks to the piabeiros. But most of those asked every year on several occasions have never heard of it. And last but not least the website mentioned (now called opefe.com/Piaba.html) has never been updated after 1999 (for about 10 years) except for the announcement of his new “expedition” to make a difference for January 24-27, 2010 from Manaus and his offer for touristic journeys (and no “projects” except for financing him?). But these were not his only “untraceable” presentations 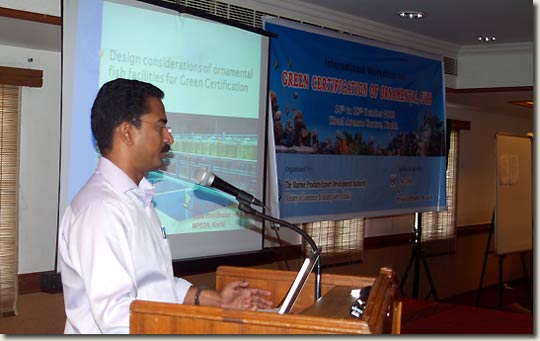 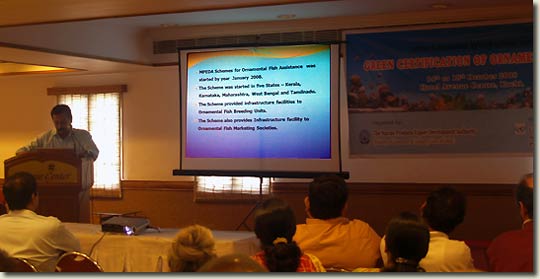 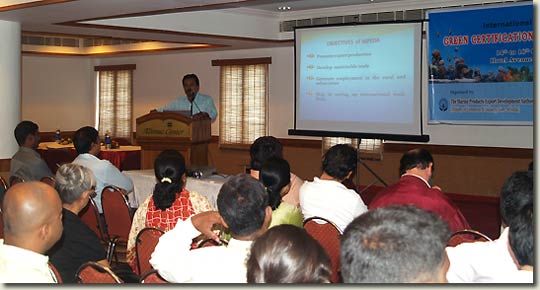 MPEDA has, since begin of 2008, implemented assistance for Design of Ornamental Fish Facilities for Green Certification and their objectives include the promotion of export production, to develop sustainable trade and to generate employment 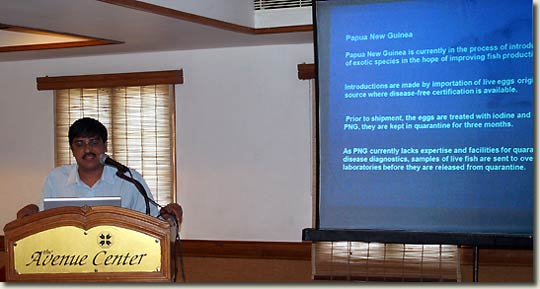 There were many excellent presentations, but also some with statistics not updated or only superficially researched like the introduction of exotics in PNG to be in the process which has occurred already more than a half of a century ago in large scale, or statistics of Asian imports of ornamentals which have not shown a fraction of the actual values generated. Also the species diversity presentation was outdated as we have over 30.000 fish species and Heiko Bleher alone has introduced more than 3000 (vs. 800 species shown) into the aquarium trade… 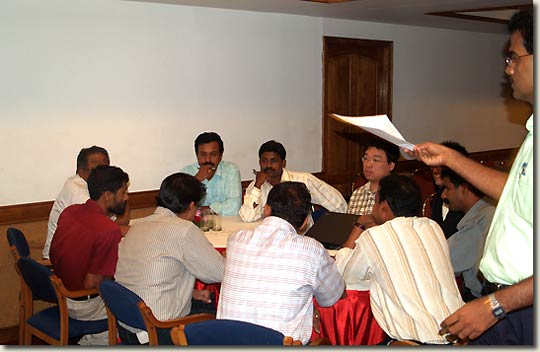 There were round table discussions every afternoon for each one of the topics of the Green Certification Certificate and at one point Labbish Chao was showing the nets to catch Cardinal tetras in Amazonia, which had very little  – or nothing at all – to do with collecting methods and fishes in India… Anil Kumar was, after each round-table session, collecting the written papers, the results from the agreed methods of how to proceed in the Green Certification of Ornamental Fish

After the sessions a beautiful party-dinner was organized by MPEDA and final intensive conversations took place, here between the Director Thomas (left) and also with the Chairman and the Director (right) 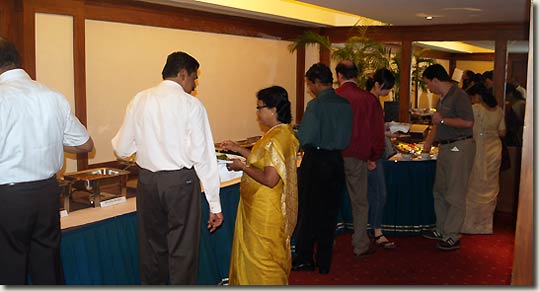 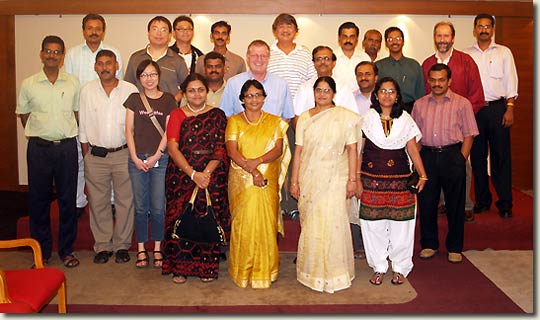 There was an excellent Kerala-dinner buffet, which is traditionally eaten with the hand and at the end of the beautiful evening a group photo of the participants of the workshop