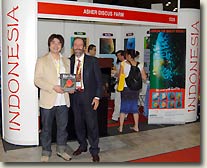 Heiko Bleher did his first aquascape, a 4000 l aquarium, at the IGA 1963 (Internationale Gartenausstellung) in Hamburg, Germany, at the time it was the largest International Garden Exhibition in the world. He decorated his aquarium as an authentic biotope of the Rio Guaporé in Mato Grosso, Brazil. Germany’s president, Heinrich Lübke, handed Heiko, for his mother’s company Lotus Osiris, his first Diploma for his work and appreciated the giant aquarium very much (for almost 10 minutes looking at it and asking questions…).

That was Heiko’s start of his participation in fairs & exhibitions worldwide.

Below is a list of some of the fairs, exhibitions & conferences he participated and/or helped to organize, to make them popular around the world – in the fish, aquatic plant as well as in the pet trade, in the hobby and under scientific communities. And some of those fairs & exhibitions have grown and became what they are today, because of his engagement (which some of today’s organizers like to forget…).

tetras, his discovery (many years later described as Hemigrammus bleheri)

in an acuascape similar to nature. No one had ever seen such a combination

international Interzoo was in cooperation with Aquario Rio Negro and its owner,

Hans-Willy Schwartz, who arrived together with his wife Robine from Manaus.

every following Interzoo which took place in Wiesbaden, a big party in his large

Zeppelinheim house near Frankfurt airport, for fish people from around the world.

–   INTERZOO 1982 – Wiesbaden, Germany. Also for this and the following Interzoo

(and his party’s) Heiko invited scientists, pet trade, wholesalers and retailers, as

well as hobbyists from around the world.

–   INTERZOO 1984 – Wiesbaden, Germany. During this large his aquarium display

of natural biotopes, Heiko showed for the first time new and rare sting rays he

–   INTERZOO 1986 – Wiesbaden, Germany. Heiko displayed for the first time the

freshwater sawfish he collected with Gordon Staples in northeastern Queensland

in an exhibition. In a 4000 l aquarium, were he hand feed three of these unique

and newly discovered Pristis species. It was a international sensation – one-of-a-

kind display. In addition Heiko showed for the first time how an aquarium

habitats, with or without plants according to their origin, etc. It was welcomed

buy pet shop owners from around the world.

entirely by Koroko Company and Heiko Bleher. The discus were collected from the

(shown for the first time) from Schmidt-Focke to Japan. The exhibit took place for

two days only on the 44th floor of Tokyo’s World Trade Center building and 44,000

visitors came to see it. After that people around the world became aware of the

1986 in Wiesbaden. And Zoophilia was a success.

worked with, he displayed his new discoveries from West Africa.

November 24-27, 1987.  Aquarium Rio represented with the Heikomobile at the

main entrance of the exhibition and with new fish species.

–   INTERZOO 1988 – Nürnberg, Germany. Heiko just back from expeditions across

vehicle on the base of an Mercedes-Unimog named Heikomobil, he exhibited

it at the first Interzoo now taking place in Nürnberg.

–   FISHWORLD 88 – organized by the Federation of British Aquatic Societies –

was very successful and well attended internationally, because Heiko had engaged

–   EXPOZOO 1989 – Paris, France. This Expozoo was to be special, simply because

Brackishwater FISHES (see Projects). A book he had been working on since 1985.

Heiko Bleher coordinated speakers from around the world for the first Aquarama,

among others: Kamihata san, President of Hikari, Japan; Holger Windelov,

others, he also send out invitation to all major companies from the pet-trade (and

specially aquarium hobby). Heiko was also the head of judges for discus

categories and gave the keynote speech.

largest aquarium show in Australasia (at the time) in Auckland, New Zealand.

invited selected speakers from many different countries, such famous discus

Fang, Taikong, Taiwan; Kamihata san, Hikari, Japan and many others. Heiko was

Keynote Address. On his stand he introduced new species collected and the

aqua geõgraphia – Life above and below water and the scientific aqua, Journal

of Ichthyology and Aquatic Biology. (Later changed its name to: aqua,

November 1992. Heiko received for his participation and lectures a certificate

South Korea. Heiko participated by bringing all discus, doing the judging and holding

the keynote speech and conference talks.

Bleher was head of judges and gave conference talks. He invited for lectures and

of Nishikigoi to the world, and many others. Heiko also nominated the judges,

including Peter Thode from the USA. It was the biggest of all Aquarama exhibitions

DISCUS and supplements. But the world’s most sensational discovery and

Melanotaenia praecox – which Heiko had collected and brought back alive

for the first time in 1991 and reproduced. In the meanwhile it is one of the

most popular aquarium fishes of all times. About 5 Million are breed monthly

around the world from the 13 he collected.

Discus Association with the help of Heiko Bleher, who judged the Discus.

1995. Heiko Bleher suggested some of the judges and judged discus himself.

for the different conference topics, which most of them, mainly from Asian countries,

the first international discus championships. And he traveled around the world

to invite discus breeders to show their beautiful discus. He talked to his friends

and many more persons which have contribued  to this show. He coordinated

many details, such as: method of judging; categories (as already done by him

before in Japan, China, Japan and elsewhere and as shown in his publication

DISCUS Heiko Bleher & Manfred Göbel, since 1992); size of aquariums and

display; lectures and participants; and much more. It was an international success

and the International discus championships takes place in Duisburg every even

Heiko Bleher was invited, as the first and only western participant, to judge

the new publishing company Aquapress from Italy, as well as with Valverde

25-28, 1999. The exhibition stand was in cooperation with Valverde Aquarium

The exhibition stand was in cooperation with Valverde Aquarium S.r.l. Italy.

C. Hagen, Canada and NUTRAFIN max. Over 30,000 visitors appreciated his

an upper Orinoco-affluent-biotope; from Central America an authentic biotope and

much more. Total of 37 biotopes created by Heiko.

aquariums in his special designed show-stand sponsored by Rolf C. Hagen and

Nutrafin. This display in such a form had never been done before. One enters the

dark black room, and all one can see is the aquarium with the authentic biotopes

stand display, next to the Aquapress-Stand, sponsored by Rolf C. Hagen, was a

sensation in this exhibition and. “NUTRAFIN presents Heiko Bleher’s authentic

stand. There were biotopes of:

October 3-6, 2002. Besides new publicatioins on his Aquapress stand, Heiko also

world – most of the species he collected himself. The stand was sponsored by Rolf

C. Hagen and presented by NUTRAFIN max. In one aquarium he had 60 Heckel

discus from the Rio Nhamundá with authentic decoration.

And here, as before and in following biotope exhibitions, the were photos around

of the stand with the words: “NUTRAFIN präsentiert eine Poster-Serie von HEIKO

visitors appreciated Heiko’s biotope stand. (This was the last time it was organized

be the Messe Friedrichshafen, from next year on Norbert Zajac organized the

Again next to the Aquapress stand with new publications, Heiko decorated the

by Rolf C. Hagen under their brand NUTRAFIN, which was visited  this time by

SARS the exhibition was delayed to October – for the first time).

the world had a stand, including Aquapress Bleher.

sponsored by Rolf C. Hagen and NUTRAFIN max. In the stand he decorated 9

an aquarium from Ubangui, Central Africa; a Rio das Mortes biotope; one from

the lower Niger-Delta; one from the Pantanal, Brazil-Bolivia; Ayamaru lake in

(also with own collected fishes).

The fair has a very nice sentence: “A Happy and Healthy Life with Pets” see

October 03, 2011.This was the last edition of this exhibition & Conference…

in Mexico’s second most populous city Guadalajara. A business-to-business

trade show and conference, Messe Nuremberg North America believes it will be

5,000 buyers of pet products, and Messe Nuremberg hopes to establish a new

business arena for domestic and international companies interested in the Mexican

pet industry. The event will be directed by industry insider and president of the

Center. No. 2268 Hongqiao Road. Final dates in October to be announced
–   The 16th CHINA INTERNATIONAL PET SHOW – CIPS’12 will be held during

in Asia-Pacific region, will display the latest products and technologies in the pet

2012. This is the the most fantastic Aquaristic Exhibition & Conference, as well as

competition in the UK, and the the best location. It was an incredible success in