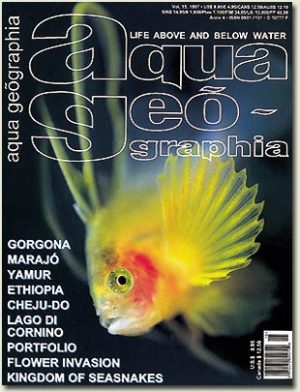 MARAJÓ
Photos: Roger Leguen and others – Drawings: ag archives  –Text: ag editorial team
A dream island? Even if you don’t agree, Marajo is still the largest river island on Earth, yet little known in the outside world. A wildlife paradise (at least some of the time) beyond compare – but a threatened one…….

GORGONA
Photos: Erling Svensen – Text: Rudolf Svensen
Gorgona is another island, equally little known, this time in the Pacific, off the coast of Colombia. This little (24 km?) patch of land, with its breathtaking flora and fauna, is rigorously protected, and is a real pearl beyond price.

PORTFOLIO
Photos: Patrick Louisy – Text: Patrick Louisy and the ag team
This issue’s Portfolio displays the work of the renowned French nature and underwater photographer Patrick Louisy, and includes fish eyes (real and dummy) plus unique photos of the adaptation of primitive creatures to their environment.

CHEJU-DO
Photos: Jurgen Freund – Text: Evelyn Seegers
The Svensen brothers describe the island of Chejo-do off southern South Korea, together with its culture and traditions, following their participation in the world diving championships held there.

ETHIOPIA, PART 1
Text & Photos: Heiko Bleher – Drawings: ag archives
Ethiopia, part 1, is the first in a series about a country that often hits the headlines and has received extensive media coverage. But there has been no previous detailed study of its flora and fauna, its life above and below water, its ancient traditions and culture, and its incredibly rich history. We have set ourselves the task of rectifying this omission, and hope you will not be disappointed by our efforts…

LAGO DI CORNINO
Text & Photos: Adriano Penco
In the extreme Northeast of Italy lies a crystal-clear lake, surrounded by a picturesque redoubt of the griffon vulture, now protected as a nature reserve. Not to be missed!

FLOWER INVASION
Photos: Ron Watson & Burkhard Kahl – Text: Ron Watson
Flower Invasion is a tribute to the blossoms of the world, telling how and when these splendid creations first appeared on Planet Earth.

Be the first to review “aqua geõgraphia 15” Cancel reply