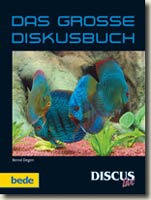 BOOK REVIEW (at the moment available only in German)

Bernd Degen and 14 other authors

Another Discus book from bede-verlag, and one can only ask, “Why?”  Apparently, to get there before a recently very successful, and really large Discus book, based on genuine knowledge and practical experience, and being published in two volumes by another publishing company (the first, really large volume is already almost sold out).  Even the format and the headings to some chapters are almost identical with the already-published Volume 1 and the forthcoming Volume 2. Although the publisher cannot have the slightly idea of the content of Volume 2.
But to the book itself: it begins with Geschichte der Entdeckung (= History of Discovery), which has been described hundreds of times but nevertheless the author has got it wrong, as it is not the Heckel Discus that was known as the Pompadour in the USA and elsewhere, but the Brown Discus. A lot is known about the early breeding of discus, but not by the author of this chapter, and he is also unaware that the first regular importations of Discus didn’t begin until the middle of the 1960s. And that no Discus has ever been caught in the mouth of the Rio Branco. He also appears never to have visited, and/or researched, the Rio Negro, as there is practically no difference in the water conditions cited from the Heckel Discus collecting site to Manaus, and there is no white water in the vicinity of Manaus. Moreover the boom in wild-caught Discus first began in the second half of the 1960s (there were practically no captive-bred stocks then) and not later as stated; but then the author was not involved with Discus back then.
Under Klassifizierung der Diskusfische (= Classification of Discus) it gets even worse. This appears to have been written by somebody with no idea of taxonomy and who has misunderstood the scientific work. Here are just a few of the mistakes:
1.    There are no Discus in the Amazon river itself;
2.    The “experts” are not at odds over the number of species that exist, that was

or describe any species. Pellegrin in fact simply described a variant, which he

Kullander synonymised all the subspecies.
5.    A so-called “classic” division of the wild varieties exists only among Discus

enthusiasts, not in science, and normally comprises Brown, Blue, Green, and

Heckel Discus. The “classic” division given here exists only in this book (and

of the scientific facts.
6.    There are also incorrect data cited regarding Symphysodon discus: eg Natterer

describer but in reference to its form; to date there is no evidence of the

occurrence of a Blue-Headed Heckel Discus in the Rio Jauaperi; there are no

S. discus in the Lago Nhamundá.
7.    It was not Axelrod that collected Symphysodon willischwartzi (since 1986 a

synonym of S. discus), but a caboclo in the employ of Willi Schwartz, and the

type has been examined (by Kullander) and identified as indisputably S. discus

Heckel, 1840, and is neither a natural hybrid nor a subspecies. In addition the

(= a synonym of S. haraldi) contains a number of errors: the ichthyologist Schultz

(the describer), who named the subspecies in honour of Axelrod, was never in

Amazonia; Axelrod was in Amazonia for the first time in his life in 1959 and not

“many years earlier”; it was not Axelrod who discovered the Cardinal Tetra, but

H. Sioli (and never collected it, as he obtained the Cardinal Tetra from a pet shop

in New Jersey); Axelrod was not one of the leading collectors for the aquarium

hobby (nor involved in a collection) – that honour goes to W. Pretorius,

R. Wandurraga, F. Cochu, A. Bleher, W. Schwartz, inter alia; there is no

are again errors in the text, for example: the majority of Blue Discus do not

originate from the Purus, and Manacapuru is not on the Purus, but at the mouth

(= S. aequifasciatus) is particularly full of mistakes: there are solid-coloured

caught mainly in the Lago Tefé, in the Jutai, Coari, and Japura regions; in the

had obtained Tefé Discus by the end of the 1960s and not only 12 years ago;

Asian breeders have never crossed wild-caught Discus, it was the Germans

who did that and the Asian breeders then bought the Tefé crosses; so-called

“Royal Green” Discus have nothing in common with the “Royal Blue” Discus,

they simply have the red dots all over the body, sometimes arranged in the

or Blue, at most they suggest a “common name”.
11.  Apparently the author also has his doubts (under: Erste Zweifel (= First Doubts)),

as not only are Green, Brown, and Blue not three species but only two

(S. discus, S. aequifasciatus, S. haraldi) are not prone to crossing, either in the wild

or in the aquarium. (That is, moreover, extensively documented scientifically.)
12.  After summarising the work of Kullander, inter alia, the author next mentions the

Kullander, 2006). But he has also (apparently) not actually read that work, as it too

lists three species, as Géry & Bleher had already done in 2004. In addition he has

on morphological results. Only the red spots in the third species, which they call

S. tarzoo, are mentioned. The fact that in Pellegrin’s day there was no formalin and

the specimens were stored in alcohol again speaks of ignorance.
13.  In addition, under the heading Symphysodon aequifasciatus tarzoo (which Ready

et al. list as S. tarzoo, and merely suggest this name, not scientifically describing it)

there are again considerable deficiencies: the publication where the article by Lyons

with the “unofficial name” Symphysodon Discus Tarzoo appeared, is dated 1960 and

the publication dated 1960 supposedly appeared on 28th November 1959 (quite

publication that is critical.
14.  The author’s comments on the 2007 revision by Bleher, Stölting, Salzburger &

Meyer are incorrect and full of mistakes: he overlooks the fact that the locations

used in this work lie far further apart than those in all other genetic works; that

been known since the beginning of the century and published since 2004; that

attributed to him in the form published here, nor was permission given to quote

him (there may be action as a result – pers. comm.); there was never any

question of designating a holotype, as the time for that was long past, it was

only the designation of a lectotype and paralectotype for S. aequifasciatus that

was stated to be urgently necessary back in 2004; that the specific taxon tarzoo

nomen nudum); that at the time of the description of aequifasciata by Pellegrin

original description – another “oversight” on the part of the author); that the

at it, about a year later than Blehers Discus Volume 1); that Géry (not Gery´)

& Bleher never designated a holotype, but, as already mentioned, a

lectotype and paralectotype, and not purportedly, but actually, published; that

the types illustrated are not “purported”!, but the actual syntypes of Pellegrin

in the MNHN, all with their original numbers (attached to each specimen);

that the red dots are visible (apparently the author has poor eyesight, which

instance, no holotype was designated back then for aequifasciata – now

aequifasciatus – so  there can never be one as one was never designated,

& Bleher); and he has also failed to notice that according to the ICZN

(International Code of Zoological Nomenclature) only three species are

currently valid, and they are S. discus Heckel, 1940, S. aequifasciatus

works” referred to, which is the recently published (2008) genetic paper,

made no difference. This genetic publication also recognises three

of Discus) also contains some notable errors: page 20 (below left) is not a

there is no Heckel Discus to be seen on page 21, either above left or above

exist except in the trade), likewise on page 27; on page 24 an Asian tank-bred

is shown as a Tefé Discus (above right), and page 25 (below left) is not a solid