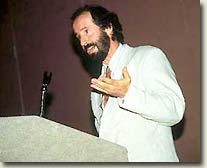 Heiko has been invited for lectures on nature already with the age of 19. Since the mid 1960s he is asked to give lectures and seminars on aquatic habitats, endangered species, global warming and the worldwide destructions of natural habitats; on authentic biotope aquariums and much more (see also Possible lectures). Here Some of his most recent ones…

Heiko gave his first lectures on nature, aquatic biotopes, flora and fauna of Brazil – and specially its fishes – while working at Gulf Fish Farms in Florida, USA in the years 1963-1964. In the following years in Rio de Janeiro, while renovating the public aquarium he gave his first seminars (1965-1967), mainly on aquascape and decoration as in nature. September 1967 he moved his, 1965 in Rio de Janeiro established, company AQUARIUM RIO to Frankfurt, Germany, and started to give lectures in many more countries. His topics at that time were mainly about tropical freshwater fishes, aquatic plants, biotopes, and he started to give lectures on the destruction of the natural habitats of flora and fauna worldwide. Later he was invited because of his presence in the pet business for decades (and in the 3rd generation) also to lecture on the past, present and future of the pet trade and the aquarium hobby. In addition he did hold seminars for hobbyists (animal, fish & plant lovers), retailers and wholesaler and how they can/should improve their hobby and/or business. Since the early 1970s such lectures & seminars have taken him around the world. To this date (2007) he has been invited to more than 50 countries, giving lectures & seminars normally in 6 languages (German, English, Spanish, French, Italian, Portuguese). Below is a list of some of his past keynote speeches, lectures & seminars (see also possible lectures), but the list is by far complete…

Lectures: “The longevity of Catfish in Central South America” and  “The Adventure

on “Wild and tank breed discus”; on “Classification of natural species and tank

Lecture: “Keynote Address” The beginning of the chain…

their meeting at Expoaviga (Keith Barraclough was than president of OFI), as

well as the IPTO. (in English & Spanish)

American fish groups” and “African cyprinids” for the Institute of Hydrobiology.

breeding and marketing wild-caught fishes, as well as protecting  the fish industry:

past, present and future” a “Keynote speech”. Heiko also did the judging and

helped to organize this unique and first international  event world-wide.

Lectures & seminars on: “Discus fishes in the wild & breeding forms around the

May, 1990. Lecture: “Collecting fishes in Amazonia and around the world”

for the Petlife Distributors and Auckland Aquarium Society.

and the Aquatic Trade”; and “The Health of Fiosh in Transit: lates and Best

STUDY OF THE CICHLID FAUNA OF LAKE VICTORIA – Colombus, Ohio,

term goals of fish conservation genetics”. A slide presentation on the impact

of the Lake Victoria issue on the local people.

November 6-8, 1992. Lectures: two. Heiko received for his participation and

lectures a certificate of Appreciation.

did the Keynote speech: “Current Trends in the International Aquatic Trade”;

than:”Global Problems and the Aquatic Trade”; and: “The health of fish in transit:

Heiko had invited top speakers from around the globe, including the Dr Keith

Banister talking on “International Legislation and the Aquatic Trade” and many

presentation of Amazonia. Heiko participated by bringing all discus, doing the

judging and holding the keynote speech and conference talks. (in English)

Lectures: two. Heiko was elected with the Man of The Year Award.

on The World Aquarium and Hobby: Status and Potentials  – Manila, Philippines,

Future,” and “ Aquatic Biotopes in Five Continents: Environment of Fishes and

Plants in their Natural Habitat.” (in English)

from Central and West Africa”.

international contribution to nature and the protection of aquatic habitats. (in

Africa and than Central Africa. (in German).

Lecture:“The Kingdom of Apistogramma species”. For the lectures presented to

“The incredible Kamaka and Lakamora Adventure” and “The discovery and

collecting of the dwarf neon rainbowfish – the fish of the century”.

for the first time alive, such as Galaxias zebratus, two new rainbowfishes,

introduzione in acquario”. (in Italian)

2001. Lectures: “The true Melanotaenia misoolensis”; “ The Fish of the

into the hobby more than 3,500 fish species” and “Central Asia – the unknown

new taxonomy of the species”; “Discus breeding around the world”  and “Pet-Trade

in Europe”. (in English & Russian)

der Gewässer”/”Discus in Amazonia”. (in German and English)

Lectures:  two – seminars on discus in nature and breeding.

Lectures: Keynote speech “The lates freshwater discoveries made by Heiko

Cameroon, Uzbekistan and Kyrgyzstan during the last two years” and “Where to

Lectures: “Fishes of the Desert – crossing the Sahara and discovering fishes,

and “Heiko´s latest Expedition on God’s Land. Collecting fishes up to 4000 m

high in Kyrgyzstan, a land which partly still has not accepted money as form of

maintain a petshop the correct way”. (in English & Russian)

of the genus Symphysodon”.

“Discus feeding in nature” and “Why are there 3 Discus strains in nature”.

Lectures: Keynote speaker and two lectures: “Fishes around the world I” and

“Fishes around the world II”. http://www.ornamentalfish.org/

speech and seminar: “History of Discus breeding”. (in English)

Lecture: “The history of Discus taxonomy and the new taxonomy of 3 good

activity features and keeping peculiarities in the pet shop condition. Proposals for

Africa and their keeping in aquaria”. (in English & Russian)

Lectures: “The history of discovery of the discus and it’s species” and “West-

Africa Expedition with its unique fishes and unknown tribes people”.

1-3. Lecture: “The positive development of the pet market in European

“Natural Biotopes of fishes and plants and how to apply this best to the aquarium,

in poet shops and to the home aquarium. http://www.akwarysci.com/sympozjum/

– immediate need for conservation of surrounding habitats”. (in English)

(in German and English) www.zajac.com

The history and classification of the genus Symphysodon Heckel, 1840.

Lectures sponsored by TROPICAL: Discus and Angelfishes and their tank mates

–   SEMINARS AT THE NATURAL HISTORY MUSEU OF BUKAREST ”Grigore

for angelfishes and others); Aquarium plants and fishes – what is best?;

cattle ranching (in both Brazil is now the largest global producer) – updated to 2007.

Genus Symphysodon Heckel, 1840 (Perciformes: Cichlidae) and how its three

species can be defined from their habitat and chemical water parameters, better

than from their molecular or morphological characters

–   Lectures for the CAOAC and the Durham Region Aquarium Society – Canada,

for the rainbowfish of Lake Wanam.

August 6-9, 2008. Lectures: The Freshwater Stingrays of Africa, Indochina, and

Australasia; and Habitats and Varieties of Freshwater Stingrays in South America

and Breeding of Freshwater Stingrays in Russia. (cancelled)

and The Aracá Expedition – Amazonia (2).

Future of the Aquarium Hobby.

Lectures: Present and Future of the Aquarium Hobby and Biotope Aquariums.

for Export Worldwide and how to Market them Adequately (1).

Tropical from Poland and their representative for Turkey have invited Heiko

Bleher for several seminars during 2 days to be hold for petshop owner & aquarists.

Seminars: 1. Biotope aquariums and how to do them, correctly to nature.

2. Aquatic plants in nature and in aquaria. 3. Discus in nature – distribution,

habitats, collecting and nutrition. 4. Biotope aquariums and how to do them,

correctly to nature. 5. Cichlids and discoveries in West and central Africa.

6. Expeditions to Central Asia with some similar aquatic habitats as in Turkey.

invited Heiko Bleher again for seminars in Athens, like in December 2007.

Seminars: 1. Expeditions across West and Central Africa with new cichlids and

unique habitats including. 2. Discoveries in the upper Jutaí river in 2008 with the

collection of 400 green discus and other fishes. 3. Central Asia discoveries – with

from over 10 expeditions. 4. Natural biotopes of fishes and plants and how to apply

this best to the aquarium. 5. Collecting and discoveries in South America – with

best in aquaria. 7. Discus nutrition in nature and suggestions how to apply

nature’s nutrition best to the discus in captivity.

1. Sierra Leone and Guinea in search for new cichlids & killis. 2. Something special

on the Discus. 3. The Rift lakes of Ethiopia.

Also: Biotope Competition and some (3) biotopes set up by Heiko Bleher.

Lectures: 1. Expeditions of the Amazon – This included 3-4 (short) photo-essays

of over 330 expeditions Heiko Bleher made throughout Amazonia highlighting at

least one expedition of each of the 3 known Symphysodon species. 2. Discus –

their history of discovery (including the true discoverer of the Amazon), distribution,

habitats, water parameters, mates and nutrition in nature. 3. There will also be

some information on natural hybrids and his latest discoveries in 2008.

1. Natural biotopes of fishes in nature around the world and how to apply it

best to aquaria. 2. Characins in the wild and their captive husbandry and

–   PRESENTATION AT THE HOUSE OF STAN SUNG – U.S.A., California,

distribution & habitats, including suggestions of how to keep them in aquaria

one collected before. 2. Geophagine Cichlids, their history, taxonomy,

distribution & habitats, including suggestions of how to keep them in

aquaria according to nature.

taxonomy, distribution, habitats, nutrition and how to keep wild discus in aquaria.

–   SEMINARS AT THE BUREAU OF FISHERIES AND AQUATIC RESOURCES –

in the Sierra Madre.

Present & Future; 2. Aquatic Plants in Nature and in the Aquarium; 3. The

1. Northeastern India Expedition 2009; 2. How to stimulate interest around

the world to buy ornamental tank breed and native fishes from India; 3. How to

and Future of the Aquarium Hobby world-wide; DISCUS – their history

of  discovery, taxonomy, distribution and chemical water parameters in

tank breed Discus: How to prevent diseases, How to feed them

correctly & Advice on how & what to buy; 2nd. day: Natural Biotopes

the aquarium; Some advice for Aquarium Shops; Breeding establishments

–   CI event tentatively with the participation of the UN Secretary – Los Angeles,

September 10th in Nagoya for Students of NCA (a vocal collage of aqua);

September 11th in Nagoya open for public; September 12th in Tokyo, open for

public. Seminars on the topics of: Amazon story; collecting method of fish

in Amazon; lifestyle of fish of Amazon.

Problems & Solutions; Discus in Nature & in Aquaria – where they come from

and how to keep them best; Discus nutrition.

Discovery of a new Green Discus and new angelfish in the Apaporis.

respectively: Freshwater Stingrays – mates of Discus and other fishes with

fishes and how to apply best to aquaria; Biotopes of aquarium plants and

and in aquaria, including tank breed vs. wild discus (in Italiano).

January, 2011 at the NSIC Bhawan, New Delhi, the 5th edition of the fair

save money with the  Aquarium hobby; The Search for Iranocichla;

Angelfish in the wild and their best tank mates; Wild Discus vs. tank

breed Discus: How to prevent diseases, How to feed them correctly &

Advice on how & what to buy; Rio Apaporis Discoveries; Fishes of

–   LECTURES AT THE ALL AQUARIUM CATFISH CONVENTION 2012 –