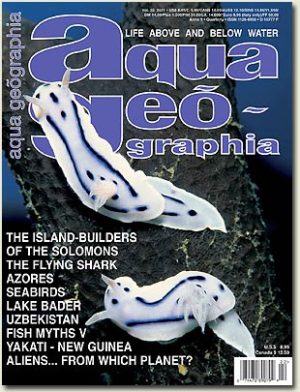 YAKATI – NEW GUINEA
Text & Photos: Heiko Bleher (pp. 6-25)
Very few people have heard of the Yakati, a small river, some 72 km long, in the depths of the New Guinea jungle. Leaving aside the fabulous new species to be seen there, finding the river is an adventure in iteself! After two failed attempts, the third expedition by the ag team finally succeeded in making their way through the greatest mangrove forest on earth to their goal.

Travel
O’ZBEKISTON (UZBEKISTAN), CENTRAL ASIA – PART III
Text & Photos: Heiko Bleher (pp. 28-39)
Our journey through Central Asia reaches it cultural high point in this issue, with a visit to a city out of the thousand and one nights. With ag as your guide, discover one of the most beautiful cities on earth, a place that few people have ever seen.

Nature unrivalled
ALIENS…?
Text & Photos: Francesco Tomasinelli (pp. 40-56)
What planet could have spawned these strange lifeforms? That is what we asked our new freelance contributor from Italy, Francisco Tomasinelli, when he showed us his photos, the result of years of painstaking and detailed work. Judge for yourself.

Endangered
THE GREAT WHITE SHARK…
Text & Photos: Ralf Kiefner (pp. 58-61)
You may already have seen the great white shark hunting seals in photos, in films, or on TV. But probably not flying sharks! Ralf Kiefner has succeeded in taking unique photos of this endangered species.

Aquatic Habitats
LAKE BADER
Text & Photos: Reinhard Dirscherl (pp. 62-67)
An alpine lake with a fascinating history as well as a beautiful flora and fauna, above and below water.

“All’s right with the world”
AZORES
Photos: Ralf Kiefner – Text: Andrea Ramalho & Ralf Kiefner (pp. 68-80)
These islands in the mid-Atlantic belong to Portugal and enjoy a perpetual springtime climate. They have been inhabited by Man for more than 500 years, but they have been the resort of more whales than any other spot on Earth for far longer – millions of years. A good place to meet Moby Dick!

Ornithology
SEABIRDS OF THE BRITISH ISLES
Text & Photos: Eric Herbert & Caren Liebscher (pp. 82-92)
Most people will have seen seabirds at some time. They often nest on inaccessible cliffs and precipices, but also on the seashore or even far inland. Sometimes they occupy entire islands (above). A fantastic study!

Cultural traditions
THE ISLAND BUILDERS OF THE SOLOMONS
Text & Photos: Leanne Walker & Andrew Marshall (pp. 96-104)
Some 300 years ago they fled to the sea, fearing the headhunters still in habiting the Solomon Islands at that time. And there, offshore, they built their homes on islands which they constructed themselves. A tradition which the Toi people still maintain today.

Be the first to review “aqua geõgraphia 22” Cancel reply