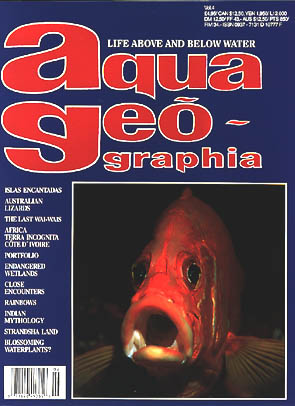 ISLAS ENCANTADAS
Photos and Text: Dr Wolfgang Staeck and others
This is the name they were given by the Spaniards in the 17th century, later they became the Archipelago de Colon, and today they are better known as the Galapagos. This Noah’s Ark in the Pacific is a completely protected paradise above and below the water’s surface.

AUSTRALIAN LIZARDS
Photos and Text: Günther Schmida and others
Below and above water, a contribution from the famous Australian wildlife photographer Günther Schmida about water monitors and other lizards which dwell quite happily in wet habitats on the fifth continent.

THE LAST WAI-WAIS
Photos and Text: Heiko Bleher
The last members of an indian tribe, considered extinct, have been visited by the ag team in the deep jungles of the upper Amazonas state. Their sad story and the remote area are portrayed in extensive text and photographs.

AFRICA TERRA INCOGNITA: CÔTE D’IVOIRE
Photos and Text: Heiko Bleher
This time our adventure takes you to the Côte d’Ivoire (the former Ivory Coast), and presents our readers with an updated survey, with previously unpublished facts and photographs about the disastrous condition of its flora and fauna.

ENDANGERED WETLANDS
Photos and Text: Ron Watson and others
In our series of reports on endangered aquatic life and wildlife dependant on wet habitats, the American naturalist and ichthyologist, Ron Watson, describes in detail the vulnerable wetlands of the Florida peninsula and the wildlife threatened with extinction.

CLOSE ENCOUNTERS OF THE FOURTH KIND
Photos and Text: Dr Gerald R. Allen and others
Our scientific contribution this time comes from the island of Bali, and brings us the “invaders from inner space”! Fishes which light their way in the deep darkness, at night, throughout the world’s oceans. Including a new discovery, a close encounter!

RAINBOWFISH
Photos: Neil Armstrong, Burkard Kahl and others – Text: Editorial team
The history of their discovery. The editors of ag present a special contribution to the 150th anniversary of these incredibly colourful creatures.

STRANDSHA-LAND
Photos: Werner Fiedler – Text: Werner Fiedler and the ag team
Bulgaria’s coastline and the merging freshwater rivers form a still unspoiled European environment. Fantastic photography above and below water, in fresh and brackish habitats, bring us a never before seen underwater world.

INDIAN MYTHOLOGY
Photos: ag archives – Drawings: Walde-Mar de Andrade & Silva – Text: Editorial team
The natives of South America have for centuries passed down some beautiful myths about the discovery of the world, the birth of rivers, and life on our Planet Earth.

BLOSSOMING WATERPLANTS – part 4
Photos: Dennerle Natur Aquaristik – Text: Editorial team
Waterplants? The editors show what is being sold world-wide as “water plants” or “aquarium plants”. Plants which belong in the garden or house, along with their longevity underwater.

Be the first to review “aqua geõgraphia 4” Cancel reply